skip to main | skip to sidebar

Do infertiles cherish their children more than fertiles? Maybe. I don’t think anyone would disagree that baby-loss mamas have a particularly deep appreciation of their living children. Am I the only one who thinks about this when I check my daughter’s breathing at night? Or when I watch her sleep, in awe that she’s actually here?

I’ve been wanting to write a post about parenting after infertility for a while. I was spurred on by an incident I witnessed on the subway on my way home from work earlier this week. Now keep in mind that it has been about a gajillion degrees in NYC this week. A mother and her three children got on the train. Two girls, maybe twins, or maybe just very close in age. About 4-5 years old. And their big brother, who looked to be about 7. The mother looked irritated and distracted. She was on her cell phone. There were three seats available, so she sat down in one seat with one girl in her lap (who she ignored, even though she was holding her), and the boy sat next to her, with the other girl next to him. The girl on the end immediately cuddled up to her brother. He cuddled her back. She was all in his space, playing and grabbing and laughing. He was wonderful with her. Patient, loving and playful. My heart swelled watching this. Mom ignored it, continuing to talk on her phone. Seats opened up on the other side of her, so she put the other girl next to her. The children were energetic and not quiet. The mom snapped. She yelled at them and smacked the girl next to her. There were too many people between us for me to see exactly how and where she smacked the girl. It didn’t sound particularly hard, but still … there was no need for it. She started crying. Mom ignored her and continued her phone call. Her big brother went over and held her and comforted her.

It’s hard to know what, if anything, to say in these kind of situations. As I was about to get off the train I told the boy he was a great big brother and that I could tell his sisters loved him so much. I expect there will be times with Sunshine that I will lose my cool. My patience is not infinite. But I can not imagine behaving as this mother did. Yelling and hitting children because they were playing too loudly? That’s not discipline. That’s just fucked up.

Back to parenting after infertility. Well, I don’t have any other experience to compare it to. I just love her so much! Every day it seems like my heart expands a little more. She is such a happy baby, I want her to have the happiest childhood ever. I am always aware of what a miracle she is. There are still cycling reminders in my apartment. The last sharps container with the PIO needles in my linen closet that I can’t part with. The unused needles and syringes in my kitchen cabinet, next to the glasses. (I keep thinking I’ll use some of them one day to inject butter and drippings into a turkey breast, like I read in a NYT article about surrogacy, but I certainly don’t need to save as many as I have in there.) Then there’s Sunshine herself. As she gets older, it’s more and more obvious to others that she doesn’t look like me. (Except for the chubby thighs!) She really looks like her sibs, my donor’s children. Sometimes I explain her origins, and sometimes I don’t. For me, it’s cool that I get a bit of a preview of what she’ll look like as she gets older by looking at pictures of J and E. She’s gorgeous! When I come to get her after work, her face lights up when she sees me. I’m her mommy. The one who nurses her, who cuddles her, who wipes away her very occasional tears. I can only hope she won’t have any problems with the fact that we don’t look alike. I hope that she will be like this girl. Proud of who she is and how she came to be.

She is my precious gift. I wish all children were cherished that way. 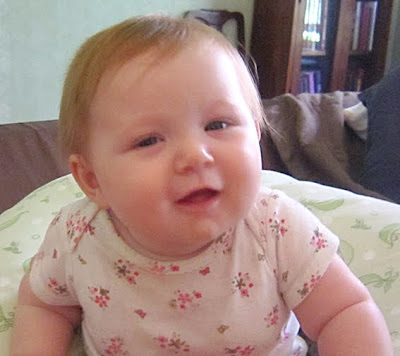 The Best of the Adoption/Loss/Infertility Blogs of 2011

The Best of the Adoption/Loss/Infertility Blogs of 2010

The Best of the Adoption/Loss/Infertility Blogs of 2009

Click here to submit my news to the LFCA